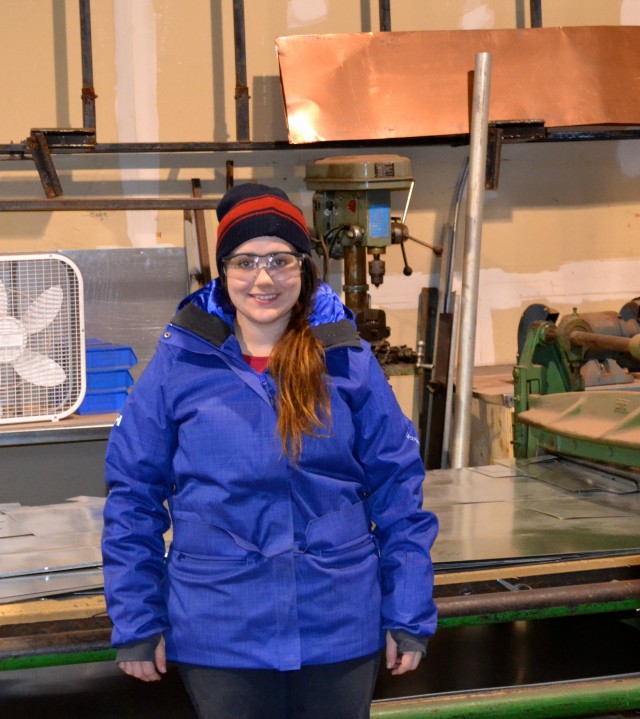 In 2012, Starr Smith was a young single mother, surviving on Income Assistance. She wanted to move off Assistance and get ahead but didn’t have enough education to be employed in anything but random, poorly paid jobs. By June of 2014, Starr Smith was striding across NSCC Marconi’s stage to accept her graduation certificate in Refrigeration and Air Conditioning and ready to enter the next phase of her life with both confidence and enthusiasm.

Starr’s life began to change when she decided to return to school and earn her Grade 12. She chose the Adult High School as her first pathway to a new future for her and her daughter. She knew it was important for her daughter to see that she valued herself and that she valued an education. While on this path, she learned from fellow students that at the Every Women’s Centre she might receive a little extra help for her daughter’s Christmas. Off she went.

Talking with the staff there, she learned of yet another pathway … Women Unlimited. As a child, Starr spent time roaming around with her grandfather, who was the maintenance manager at the local yacht club. Starr watched him as he completed the various jobs entailed in repairing and maintaining all the systems it took to run the building. He was a pro at finding inexpensive fixes for things that went wrong, and Starr loved working with him … handing him tools, doing the little things he found to keep her busy. She loved working with her hands; it felt right to be handling tools and equipment. So when she heard about Women Unlimited, which is designed to assist women explore, prepare for, obtain and maintain employment in the trades and technology fields, she was immediately intrigued.

With full support from her Community Service worker, Starr first attended the information session their office held about Women Unlimited and then applied to enter the next program. Just like that, she was off on her next pathway … still building her future. She continued to work toward getting her Grade 12 while attending Women Unlimited’s full-time Career Exploration Program.

Once she entered Women Unlimited, Starr applied herself, worked hard, attended every class and supported the women around her with her positive attitude and helping hands. In turn, she received their support and says,” I don’t know where I’d be without those women!” Each hands-on workshop presented her with a new path to consider, but with the support of the Women Unlimited staff, she narrowed her choices and, with her Grade 12 completed, enrolled in the NSCC Refrigeration and Air Conditioning Program at the Marconi Campus.

Starr’s story doesn’t end there … she’s now fully employed with Airwave Ventilation. Her employer, Kenny Noseworthy, hired women in the past and found that they pay greater attention to detail and are cleaner in their work. He’s glad to have her. Starr, on the other hand, loves her work and loves that she finally has control over her life. She makes enough money to be able to make choices about how to spend it, and right now, that’s on her first car. You go, girl … you are a star!