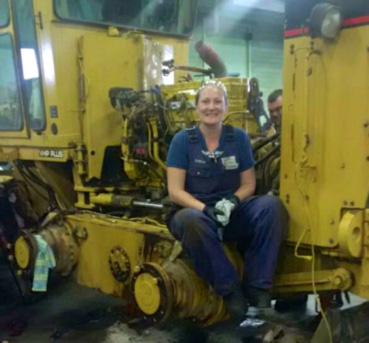 At 16, Sarah Robinson told her high school guidance councilor she wanted to be a mechanic. The councilor had other ideas, and as with many young women, Sarah was steered in a more traditional direction. She was 29 and a single mother before she got back on her own track.

A lot of life happened to get her to that fork in the road. “I took stock of what I had and what I wanted and it wasn't adding up.” Seeing a display for Women Unlimited at a Career Fair, she thought, “Finally a program that encourages women to explore the trades!”

She was accepted into Women Unlimited's 14‐week Career Exploration Program (CEP), and it proved to have just the right combination of flexibility and structure to support Sarah and her goal of becoming a mechanic.
“In hindsight, it was just what I needed. I sucked up everything I could from that program ... and it gave me confidence.”

For her, the work site visits really opened her eyes. According to Sarah, “It's all about being prepared. Once you see it for what it is, you're not afraid to pursue it”

After the CEP, Women Unlimited staff helped Sarah secure a seat in the Nova Scotia Community College's Automotive Service & Repair Program. Not only did she graduate from that program, she also earned the Gold Medal Award for Academic Excellence!

“That's something Women Unlimited taught me ... if you want something, put it in your mind and say, I'm going to get this!” That's how Sarah was hired at a dealership in Halifax before she even completed her college training. She apprenticed with them and obtained her Red Seal as an Automotive Service Technician.  She continued to work in this trade when she noticed a job opening in her field with the Nova Scotia Department of Transportation & Infrastructure Renewal in Sydney.  Although unsure of her prospects, she took the leap and applied for the job. After a lengthy application process, which included a verbal test, she got the job, outdoing all of the men who applied.

Once she completed her probationary period, she registered as a Heavy Duty Truck and Transport Mechanic Apprentice and is working toward her second Red Seal.

In less than a decade, Sarah has built two new careers. If she were to take stock again, she would probably tell you that she’s come a long way and she finally has what she wants. She is facing her future with a solid job that she loves doing and a new sense of self‐confidence that she fully deserves.  And, Sarah is paying it forward as a volunteer mentor with Women Unlimited and Techsploration … she’s encouraging other women and girls to follow their dream to build a career in the skilled trades.