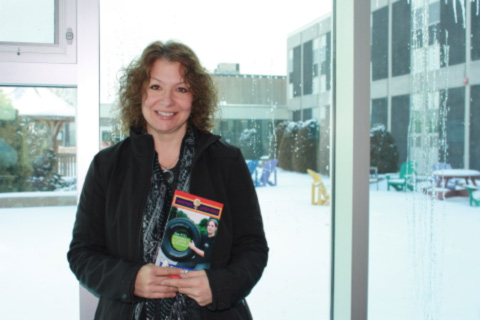 Lana Fudge’s life was about to change. After 25 years and four children, her marriage was dissolving. Her current job as a teaching assistant was only 27½ hours a week, so she wasn’t making enough to sustain herself. She lived in New Ross, three-quarters of an hour away from the nearest centre, Bridgewater.  She knew she couldn’t move far from her family and friends … her support system would be more important than ever.

The year was 2011, and a change was also coming to Women Unlimited in Bridgewater. It was the first time the program linked its recruitment strategies and curriculum directly with an employer … Michelin North America (Canada) Inc. Bridgewater Facility.  Women Unlimited and Michelin came together to create a 14-week program designed purposely to prepare women for careers at the facility.  The women were to learn what it would be like to work in an industrial setting. They would learn about the changes that shift work can bring to your life, and they would actually spend a 12-hour night shift in the facility. They were to study subjects that made them competitive in Michelin’s application and testing processes. And, they would be given opportunities to meet and speak with women already working at Michelin.

Once, Lana had applied for a job at Michelin but had not been successful. So, when a friend gave her a Women Unlimited flyer with the front fold asking the question, “Are you interested in a career at Michelin?” her immediate response was, “Yes, I am!” It was the right program and the right time and in the right place. She applied, was accepted, and began her daily commute from New Ross to Bridgewater to attend the program.

Looking back, Lana says Women Unlimited built more than just her skill sets. The personal attention, the support from staff and the other participants, the positive feedback coalesced to build her self-esteem and boost her confidence level at a time when she needed it most. When she graduated from Women Unlimited, she was ready to take on Michelin Bridgewater. And she did, as the first woman from her class to be hired there.

Up to that moment, Lana had always worked with people … as a teacher’s assistant, at the Credit Union, at Bonnie Lea Farm. Suddenly, she was into a 12-hour shift of heavy lifting. She remembers driving home after that first shift crying and asking herself, “What have I gotten myself into?” By the end of the week, she found herself thinking, “I can do this! I like working without having the mental work of dealing with people.” It was the right job at the right time in the right place.

After a winter’s commute to work, Lana decided to move to Bridgewater. A man on her crew introduced her to his wife, who was a Real Estate agent. Together, they found the perfect house for her and she made the move. She loves it! And as a bonus, she’s lost 50 pounds and has never felt so fit or so healthy in her life.