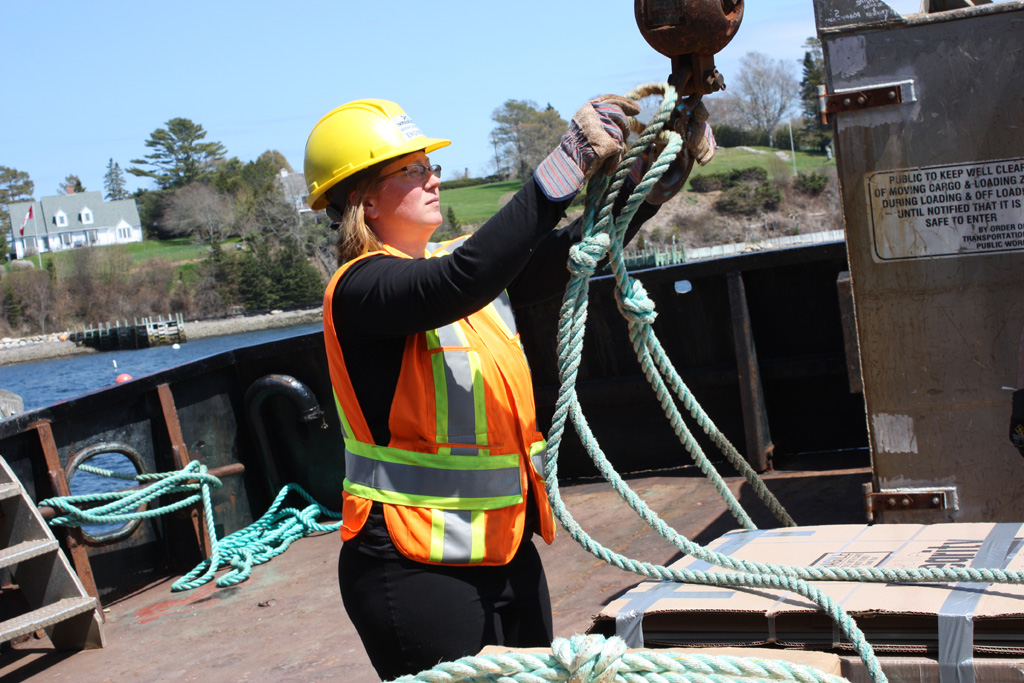 When Angela Conrad was a girl, she and her dad would cross the LaHave River on the ferry near their home. Once she asked, “How come there aren’t any women working on this ferry?” Her dad, who worked as a fisherman and knew the hard life that was, responded, “Because this is where the smart fishermen work.” As it turns out, it’s also where a smart woman named Angela works.

Angela’s story is all about setting goals and meeting each one head-on. She came to a crossroad in her life when her aunt retired and closed down the family business where Angela worked. What’s next? She discovered the Women Unlimited program on the web and knew her path was set. Someday … somehow … she was going to work on the LaHave Ferry.

When she finally told Jeannie, the Women Unlimited Site Coordinator, about her goal, Jeannie said it was pretty specific … the total work crew was 10 people. Shouldn’t she widen her scope a bit? No. Angela knew what she wanted. She wanted to work in her home community. She knew the crewmen on the ferry were getting older and looking forward to retirement. She knew jobs on the ferry were stable government jobs, which were few and far between in her rural setting. She knew what she wanted and was going to make her dream a reality.

With her Women Unlimited team behind her, Angela set out to find what credentials were needed for working on the ferry. She asked the men who worked there, but they had captained their own boats when they had applied and already exceeded any requirements. She had to dig deeper. She went to the Department of Transportation and Infrastructure Renewal, to the Marine Manager and to the Captain in Charge to figure out what course she should set. While still in Women Unlimited, she did a job shadow on the slip during the ferry’s re-fit and completed the required safety courses that would allow her on-board.

Armed with the information she needed, she chose to enter NSCC’s Diesel Repair — Industrial and Marine Program. While she studied to earn the top grades in her program (which she did!), she also earned the Bread and Roses Bursary, the Shell Oceans Award, made the Principal's List and won the President’s Award for Lunenburg Campus, as well as the Alumni Spirit Award and the Student Association Volunteerism Award.  Her on-the-job training required sea time, so she also secured a work placement on the Tancook Island Ferry for 5 weeks.

Angela set goals for herself and achieved every one. She has earned the right to be proud of herself, and so she was when her young daughter told her that she too wanted to work on the ferry. Thoughts of being an exemplary role model ran through her head, until her daughter added, “Because there’s not enough girls working there!”