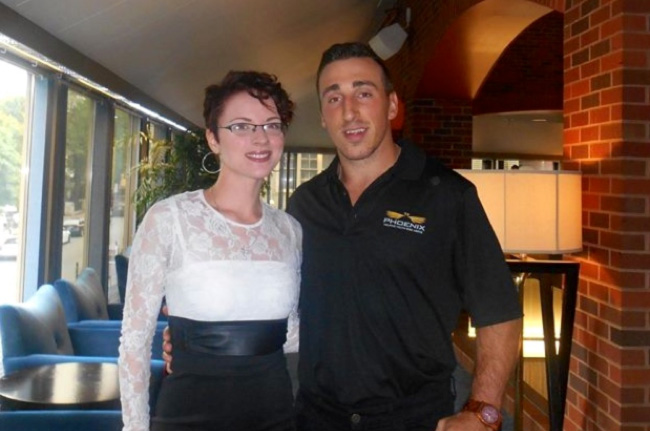 In Greek mythology, the Phoenix is a large bird that rises from the ashes of its former self. It’s an apt name for an organization, Phoenix Youth, which offers support to homeless and at-risk youth so they can recreate themselves into strong and productive adults. At 15 years of age, Amy MacLeod was one of those youth. She came from a background of abuse and addictions, and she lacked the discipline and education to make the necessary changes in her life.  Now, she’s a full time Metal Fabricator at Irving Shipbuilding Inc. She has a daughter who’s thriving, a solid support network and a future she’s building … not by running from her past, but by learning from it and by standing strong in it. She is the essence of the Phoenix rising.

When Amy became pregnant with her daughter, she knew the life she was leading had to change. She had to move into a safe environment and away from negative influences. She had to get an education. She had to be able to support her child, no matter what. And she made all the right moves … one step at a time … including returning to Phoenix, studying for and getting her GED and eventually, finding her way to Women Unlimited.

It was through the Women Unlimited that Amy gained entry into her Metal Fabrication program. Her short-term goals were to obtain steady employment with decent benefits for herself and her daughter and to get her Red Seal. Her longer-term goals include a home with a shop in the back where she can let her artistic side loose … with a welding torch in hand.

Not running from her past also allows Amy to give back to Phoenix Youth and the people who supported her through her most turbulent times. She has stood on the stage in front of, first, 850 people at the Nutcracker Luncheon and then, 1000 people at the Champions for Change.  There, she told her story. By speaking out, she hopes to illustrate the powerful work done by Phoenix Youth and to raise funds so others, who find themselves in her same shoes, can also find the people to guide them onto a new path.

It was at the Champions for Change fundraiser that she fell into conversation with a man wearing a Phoenix House shirt.
“What’s your name?” she asked.
“Brad Marchand,” he responded.
“And what do you do?” she queried.
“I’m in the NHL, and what do you do?”
“I’m in Metal Fabrication”
“What’s that?”
“That’s a smart welder!”

She is a smart welder and that’s just the thing a Phoenix, who has risen from it’s own ashes, should be!