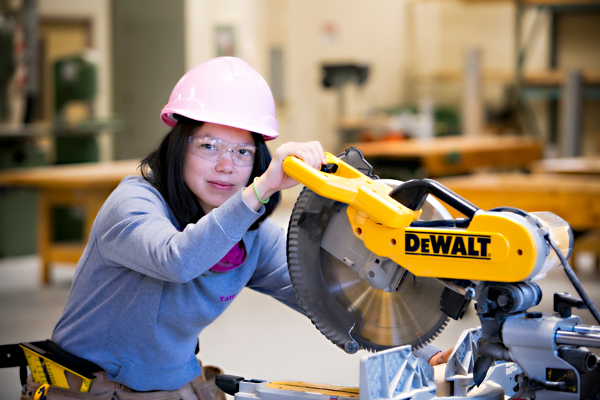 Did you know that since 2006, 875 diverse women have participated in Women Unlimited?

To date, 93% have completed the 14-week Career Exploration program (CEP)

Women-centred development focuses purposely on the needs, aspirations and experiences of diverse women. We work to address the systemic barriers women face and to empower women to make positive changes in their lives.

Partnerships make what we do possible. We engage partners from community organizations, equity groups, governments, educational institutions, employers, industry associations and trade unions in the development and implementation of our programs and services.

Women's lives are a complex interweaving of gender, class, culture, race, religion and sexual orientation. We seek out and embrace women's diversity in all its forms. This means setting diversity goals and putting strategies in place to meet them.

We look to identify and to address the economic, social and institutional barriers that limit women's full participation in trades and technology in Nova Scotia. The underlying factors include images, stereotypes, attitudes, environment and culture in learning institutions and workplaces, and a lack of or failure to implement equity policies.

A Continuum of Services

We know there are no quick fixes when supporting a woman to build a career in fields where she has been historically under-represented. We stay with her during her entire journey.

We strive to make our programs and services open and accessible to women who have the greatest need for them, whether they are rural or urban based, unemployed or underemployed, in receipt of Income Assistance or Employment Insurance or with no income at all. We are committed to removing barriers rather than blaming the women for failing to overcome them.

The Women Unlimited Association grew out of the Women's Economic Equality (WEE) Society and the Hypatia Association—two organizations that have been national leaders in building strategies to support the full participation of diverse women in trades and technology.

In early 2000, industry began raising concerns about impending skills shortages in trades and technology. Coupling those concerns with the systemic under-representation of women in these fields, WEE and Hypatia saw an opening and stepped up. They began a collaborative, community-based process wherein they reached out to all stakeholders. Throughout this process, unemployed women shared their experiences trying to access training and employment in these fields, women working in industry spoke about their sense of isolation and high schools explored how girls make career choices. The Nova Scotia Community College (NSCC) examined the reasons for the decline in enrolment of women in their trades and technology programs. Employers shared their challenges recruiting and retaining women. Governments examined policies affecting both the under-representation of women and the needs of industry to address skills shortages. And, community organizations reflected the challenges diverse women face.

In 2002, WEE and Hypatia, in partnership with NSCC, sponsored the Equality in Technology (ET) Project to assist and support diverse women to enter science, trades and technology programs at the Kingstec and Annapolis Valley Campuses. The project also examined program and policy issues relating to the recruitment and retention of women in these fields.

To respond to the learnings from the ET Project and to begin to address the systemic issues women face, WEE and Hypatia sponsored a project entitled Changing Lanes. Between 2003-05, WEE and Hypatia worked with female students, teachers and administrators in high schools and NSCC. This project allowed them to explore and develop strategies to improve opportunities for women in science, trades and technology careers. Together, they published a series of guidebooks that outlined their case for women in trades and technology training venues and workplaces and offered solutions to issues and barriers. These guidebooks can be found under Resources on this website.

By 2004, WEE and Hypatia had demonstrated the need for an inclusive and sustainable strategy to support the full participation of diverse women in trades and technology in Nova Scotia. They formed a working committee of representatives from the NS Advisory Council on the Status of Women, Service Canada, NSCC Customized Training, NS Department of Education, NS Department of Community Services and NS Apprenticeship Board to develop a comprehensive, women-centred model. The model they developed offered a continuum of services with four primary components: gender-diversity recruitment; career exploration; support during trades and technology training; and employment access and retention. Surrounding the model was a spectrum of supports including childcare, transportation, tools and resources, designated seats at NSCC in trades and technology programs and a range of tuition, tutoring, mentoring and upgrading programs to prepare women for the challenges ahead. In 2005, the 3-year Women Unlimited pilot project was launched.

The collaborative partnership grew. Steering Committees comprised of more than 40 organizations, employers, governments and equity groups worked with WEE and Hypatia to develop the local proposals and establish the local sites. NSCC dedicated space at their campuses, and deans, principals, faculty and staff committed expertise and resources. A portfolio of funders contributed financial resources and expertise. Industry and private sector members became part of the collaboration.

In 2006, Women Unlimited started at the NSCC Lunenburg Campus in Bridgewater and, in 2007, a second site was launched at the Institute of Technology Campus in Halifax. The results of the pilot lead to a new longer-term strategy. In 2009, located at the existing sites and a new site at the NSCC Akerley Campus in Dartmouth, Women Unlimited opened doors for new women to find their places in the trades and technology sector. A fourth site started in Sydney, Cape Breton at the NSCC Marconi Campus in 2011.

To date, Women Unlimited has assisted 510 diverse women—94 percent completed the Career Exploration Program and 81 percent proceeded to training and/or employment. As well, Women Unlimited has worked with employers, unions, governments and NSCC to address the systemic barriers women face as they transition into trades and technology training programs and workplaces.

Women Unlimited is committed to diversity and encourages applications from African Nova Scotians and other members of the visible minority community, Indigenous peoples, women living with disabilities and women from the 2SLGBTQ+ community.  We encourage applicants from these equity groups to self-identify.

The Women Unlimited model is holistic and offers a continuum of services and supports. Women who participate in Women Unlimited are supported along a pathway … from recruitment, to career exploration, through pre-apprenticeship training, to employment and once employed, we support her through apprenticeship and employment retention in these fields. Ours is a long-term commitment … one that supports a woman through her full journey.  We don’t do this alone; our model was built on a foundation of partnerships.  We engage the Nova Scotia Community College (NSCC), employers, industry associations, unions, governments and the community to work with us to build welcoming and respectful institutions and workplaces.

The components of the Women Unlimited model are as follows:

Work: Support to Transition into Employment